During the recent heavy rain several objects in Longstanton Brook started to cause obstructions which could have resulted in more flooding. Members removed the obstructions and called out South Cambs, who after a few hours attended and removed more blockages. Having voiced their frustration regarding the difficulty getting hold of anyone who could help, the following contact details were provided for the team supervisor: 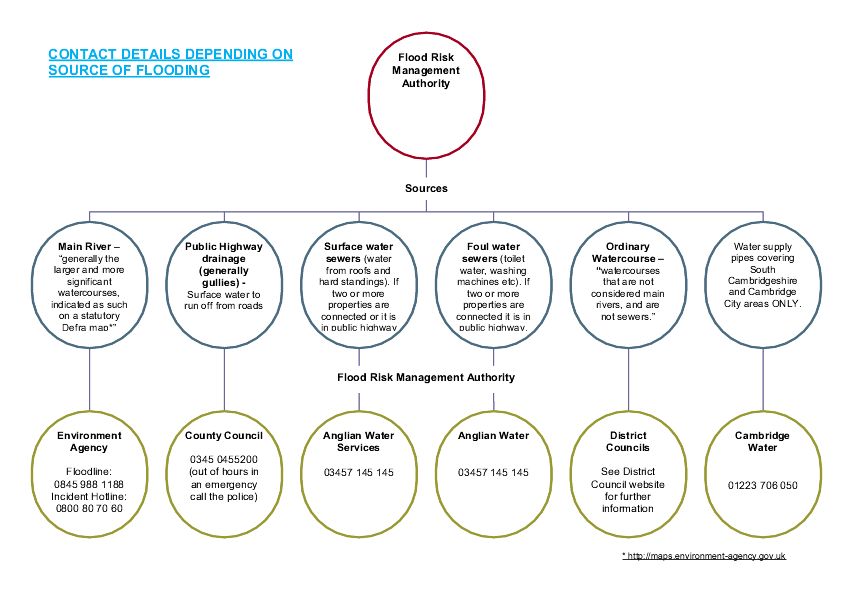 Cambridgeshire County Council provided two handouts in September 2014 as a result of the flooding:

In the event of flooding, we recommend you contact the specified authorities involved in dealing with emergencies, which are generally as follows:

Responsibility: Co-ordinate the emergency services in a major flood incident and help with evacuation of people from their homes where it is necessary.

Contact: Dial 999 only in an emergency, dial 101 for non-emergency.

Responsibility: Respond to all emergency incidents as required. Assist public with personnel and equipment where a need is identified. They may also pump out floodwater (contact your local service to ask about this. There may be a charge for this service).

Contact: Dial 999 only in an emergency, dial 101 for non-emergency.

Responsibilities: Issues flood warnings for flooding from rivers, the sea and ground water and deals with emergency repairs and blockages on main rivers. The Environment Agency is responsible for building, maintaining and operating flood defences and for issuing flood warnings to the public, other flood responding organisations and the media.

Contact: 03457 145 145 Lines are open 24/7, and customers should receive a reference number which they can quote in any future correspondence with Anglian Water.

For use in an emergency situation