Members of the flood group met with Gallagher Estates in January 2018 to discuss the working of the balancing ponds.  A useful document was shared with the group.

On May 18th, David Calvert visited the balancing ponds on behalf of Longstanton Flood Action Group. David was given a tour by the site supervisor, Phil Hardy, who was most helpful.

This view (looking south) shows where the original ditch has been diverted around the north pond area. The original ditch goes to the right of this photo (see next photo taken from the same point). 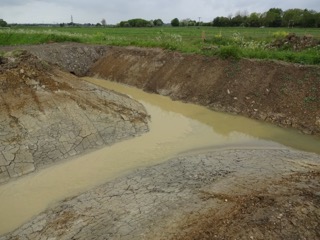 Looking north, the original ditch has been blocked to allow work on the north pond area (in the distance).

Looking west towards the B1050. The north pond should hold up to ¼ million cubic metres. 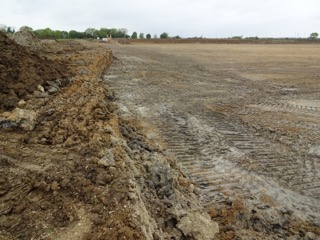 The view from the same point as above looking north (from the south-east corner of the north pond). 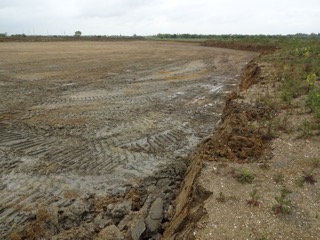 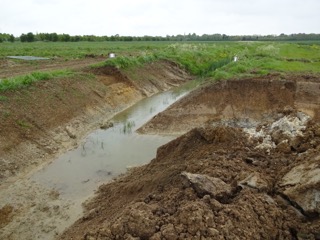 This view (looking south) shows the maximum depth of the dig. Maximum depth from the top of bank to the base will be a little under 2 metres. 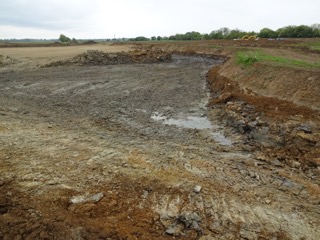 This view (looking north) also shows the maximum depth of the excavation. The main pond area is to the top right of the photo and gives some indication of the amount of soil to be removed as the pond base is lowered. 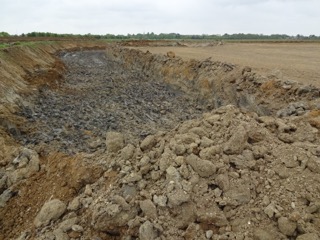 Revised plans for the Attenuation Ponds were received at the Parish Office in January 2016. Due to the type of application received, no comments can be made to SCDC. Full details of the plans can be found on the South Cambs Website

To summarise, the amendments are as follows: